The Zombies Were Having Fun

Monsterday 9: Plop, plop, fizz, fizz, oh what a relief it is! Height and weight added!

Attitude: The latest in security systems (from a small company called Cyberdyne), this “monster” will allow access to guarded places (No, not the secret comment page) by asking a question that only those qualified to know the answer can gain access to guarded areas.

Traits: Since my blog is obviously a military installation, you’ll see this monster over at the main gate. If incorrect answers are given by someone 3 times, this monster will use the robotic eye to shoot a bolt of energy that paralyzes its victim to allow for containment and interrogation courtesy of Mr. T. If the target tries to run, the monster will fly to pursue them.

Traits: Go ahead. See if your head can fit into his mouth. I dare you. No, there are no teeth! (shifty eyes)

Attitude: Incredibly confident, this monster thinks that it can take Chuck Norris.

Example of Speech: “I just kicked Chuck’s butt last week. I’ll do it again. See if I don’t.”

Traits: This monster can constrict its victims, it can use a horn attack, it can leer at you with its eyes, and it can get angry and use an attack out of fury. Anybody here work for the Pokemon Company? No? Good.

Note: This monster is now extinct. 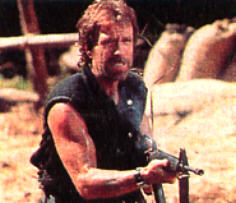 Attitude: It is a heavy drinker so whenever it speaks it tends to replace a word with something beer related. (submitted by panascakes)

Traits: Like all spiders, this monster can spin a web. The tuft of fur on top of the blobular form is the creator of the black web. Being a pretty big spider (with robotic arms), you definately don’t want this thing crawling on your face. The brown coloring allows for it to blend in to tree bark. Rather than having a poison (it has no teeth), it tends to completely engulf mice and rats and dissolve them with acidic saliva. Ouch.

Anybody want a monsterday button? If you use WordPress, create a text widget and post this code, replacing the1st parenthese with the less than symbol and using the greater than symbol instead of the parenthese at the end.

You end up with this.

This is a pretty durable creature, except for the parts of its blue flesh not covered by rock. When it wants to eat something big, it grabs it with its arms and holds it near its mouth. Because it only eats bones, it sprays an acid over the specimen that melts down to the bone. He then, obviously, eats it.

It also has very bad eyesight and is weak in the back, just in case it attacks.

The Ghouls All Came From Their Humble Abodes

Sorry about the late post. Broadcast live in front of a live studio audience, it’s Monsterday 8!

Attitude: These monsters are very friendly, and they tend to make stupid jokes about Chuck Norris.

Traits: Like many of the Intellectus species, these monsters gather electricty through the bolts and wires on its head. The more it collects, the more painful its sting, which is delivered through tentacles. Its teeth can crack even the hardest walnut.

Attitude: This monster is very friendly, but is also very literal. This one thought that my blog had a point!

Example of Speech: “Somehow i missed the point. Probably lost in translation

Traits: Because it is friendly and smart, this really isn’t a very interesting monster. You can usually find them in any city living in the standard apartment. And guess what! My blog is an apartment complex. This monster doesn’t like to be disturbed, so don’t go into room 1408.

Example of Speech: “cacti are spiny, like some of our comments here, on this funny blog. I love Jesus.”

Traits: This monster has artificial limbs which allow in to walk long distances without not having legs. The horn on its head turns whatever it touches into marshmallows and love, 2 critical ingredients in hot chocolate. This monster would play the fiddle, but it has no arms.

Attitude: This monster is peaceful and is very fond of cars.

I still need name and traits for this monster.

By the way, I have Spore Creature Creator Free Trail Version (I’ll update eventually). I could use it for Monsterdayish thing. I’ll make a creature a week!

I completely forgot about captioning pictures for a while, and now I have one. Now that I can use polls, I think that I’ll make this one a contest. Here’s the picture.

And I’m doing a favor for panascakes, who asked me to put this comic up here.

My Monster From His Slab Began To Rise 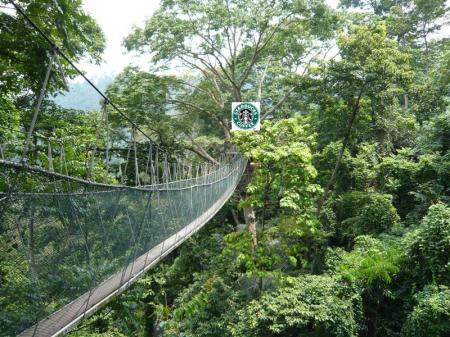 In case you’re wondering, I’m using a Starbucks that I’ve found in the jungles. Additionally, I’ve trapped another wombat, named him Pancake, and trained him as if he was a dog. Okay, time for Monsterday 4! Coincidentally, this is also the 300th post!

Let’s get this show on the road! First off, Aquos Intellectus Blobbus, or the Aquatic Intellectual Blob, this monster is remarkably similar to the last monster of Monsterday 3, although it adapted to water. These monsters are internet goers and use the five Starbucks in the Atlantic Ocean for free Wi-Fi. I had a blog posting alliance with one recently, but it tried to eat my brain. Here’s an example of speech:

“I think that I’m going to change this image (the one for non-logged in users) with shock images (I have a pet GOAT if you know what I mean.”

The brain mass of this monster is slightly smaller because lightning can not reach its head bolts. As for brain draining, this monster typically preys upon divers and sailors who’s boat crashed (ever heard of the USS Indianapolis?). Without an artificial straw for the draining of brains, these monsters have tentacles to grab prey from far away.

Next, Pointus Medusas Tiggerus Hypnotus, or the Hypnotic Medusa Arrowhead Spring-Monster. These monsters tend to complain. Families of this species are close, and they usually go on ships as one group. Also, they can live for well over 100 years and remain able-bodied. The last two sentences state why these monsters are in the monster Navy. One ship filled with the species sailed to my blog for supplies because it’s obvious that my blog is a port city, and I heard one of them say this:

“Mom! He won’t stay on his side of the warship!”

Another reason these things are in the monster Navy: They’re killing machines! They have arms that can support heavy amounts of weight, such as heavy machine guns, they can move quickly because of their spring, when in close combat, they can either turn their enemies to stone or hypnotize them to turn on their own allies, and they are living torpedoes! In a naval battle these things will open hatches on the sides of the ship, pull their bodies back, and spring over into the enemy ship. From here, they can do 2 things:

Avoid these things at all costs!

Rataillicus Hornus, or the Rat-Tailed Horned Monster. I’ll say this right now: these monsters are horribly stupid. Other than what I witnessed it say:

Typical speech for this species is:

These monsters are also pretty fast, and their arms aren’t very long, usually making them charge with their horns when in combat, making them perfect for monster bull fights! If you intend see one of these, do not wear anything turquoise, for that is the color that it charges at. A fun thing to do is give it a “peace” offering. If one approaches you, give it a marshmallow peep. Those things are like peanut butter to a dog. It’ll run around in a circle licking at the roof of their mouth.

Next up, Feminus Crabbicus Standardus, or the Standard Lipstick-Wearing Crab Monster. This monster is very strange in speech and in manner. One of them commented on a post of mine involving a dreaded lolcat and said:

When it said that it was going to review something, I followed it back to its lair and found no blogs in sight.

Like most of the Crabbicus family, they are mostly elusive or extinct. Expeditions into undersea caves, where these monsters are thought to live, have failed because of attacks by Aquos Intellectus Blobbus. This might show some sort of union between the two monsters. OR the monsters are just hungry for some more brains. Meh.

I’ll finish things off with Hovereer Orbus Vampirus, or the Hovering Vampire Orb. Despite their name, these monsters are very peaceful and have complimented me on my blog before, saying:

Because they are vampires, they tend to only drain blood from badgers, raccoons, and wombats (Pancake?). Although they can get used to this type of blood (Pancake, are you alright?), they can sometimes be driven mad by the urge to drink human blood and will go on a frenzy, killing everyone in sight (Oh, God, PANCAKE!).

I have to go! I think one of them just killed Pancake!